Spirit Airlines | The one-time only airline

…Wait, that sounds suspect what’s the catch?
I’d flown Southwest, Easyjet and Ryanair before, but this was a first on Spirit.
Outside of the lack of advertisements lining the interior of the plane, the experience wasn’t that much different than that of Ryanair. The website was fun and playful, the online purchase process was fine. 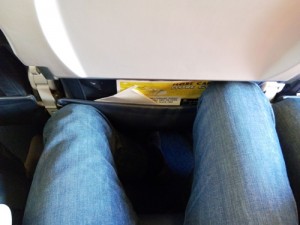 Flew the A319 Airbus which makes up 75% of their fleet… it also has 28″ of seat pitch (the space between seats), which is the least amount of space of all US domestic carriers- Source: SeatGuru.  This was a miserable amount of legroom, not to mention sitting in front of me was the reason people invented the “knee defender”, who reclined during all of descent and landing.  I’m 5’11” and at no point was I comfortable enough to sit still, much less sleep.

Carry on luggage is $100 on the jet way; pay for it ahead of time, don’t try and walk it on.
Boarding passes must be printed and you must check bags ahead of time. Could be an issue if you’re traveling and don’t have access to a printer. $10 if you check in at the airport.
You’re also required to have an account and to login to purchase tickets and to print boarding passes.  No option to just buy tickets as a guest.

Flight was delayed by 45 minutes, gate was changed. Sitting in the terminal there was no monitor to give updates, nor did anyone give any updates.

BUT, being a savvy traveler I was checking my new fave app Flight Aware to get my own updates.

It’s not called a low cost airline for nothing. However, the attendants were nice, and the ride was fine.  Because of seat size I wouldn’t fly them again for anything over an hour.