Warning – This story reads like a Jason Bourne novel. Prepare to be drawn in.

I connected with Danny Kaine, founder of NomadSOS in a Twitter travel chat after realizing that our answers to all the travel safety questions were surprisingly similar. We took the conversation offline and found that our backgrounds also have some similarities. Danny’s story resonates with me personally for several reasons, notably the fact that I’ve traveled extensively with shellfish allergies, one of the main motivators behind the creation of NomadSOS.

Here on Travel Safer we’ve also talked about having a Crib Sheet to keep your personal details in a safe place as a backup in case of emergency. NomadSOS has taken it to another level with their emergency TravelID. Outside of offering travel safety courses in exotic locations across the globe, what I love about NomadSOS’ Travel ID is that it looks so legit that their members have reported successfully using it for proof of age in bars and restaurants, to exchange foreign currency, to pick-up medical prescriptions at a pharmacy, as a second piece of photo ID to rent a vehicle, to withdraw money at banks, to enroll in classes and even to verify their account on AirBnB.

If you’re an experienced traveler you may have come across one or two of the situations Danny talks about in this interview. If you’re a greenhorn, the below answers will blow you away. There is a bucketful of great travel advice in here from an extremely experienced traveler. In fact, there is so much good stuff in here that I couldn’t decide what to cut without robbing you of great travel advice, so I turned this into a three part series.

Get your pens ready, class is in session.

When did you start traveling?

I joined the British Army at the age of 15 and a half. After I had completed my training, I was sent to my unit but at the time they had deployed to Kosovo. By this time I was not quite 17 and could not deploy to an operational environment until I was 18. And so, it was just me, a Captain and a Warrant Officer.

After a few days of finding my way around, the Captain called me into his office and quite comically told me that he didn’t want to babysit me for the next 6-months while my unit was away and told me to find something to do. I was confused by this. I was new to the Army and didn’t really know what he meant. He told me to report to the training wing, find a course that preferably starts within the next few days and go do it, he didn’t care what course was, he would approve it. So I arrived at the training wing, explained to the Sergeant why I was there and he looked even more confused than I was. To cut a long story short, I was sent to join the Regimental Sailing Team as a novice. We would sail from the South of England to France.

Did I mention it was November?

It was midnight, complete darkness, high winds, sideways rain and snow, and incredible waves. Having never been on a boat before, I did not know that I suffered from the worst sea sickness. I was on board for 3-days and nights and literally spent every minute outside being ill over the side. I was so sick in fact that I was air-lifted by the coast-guard off the boat with mild hypothermia and dehydration. A few days later I arrived back at my unit. No sooner had I arrived, the Captain called me into his office with a smile on his face and said “that went well.” 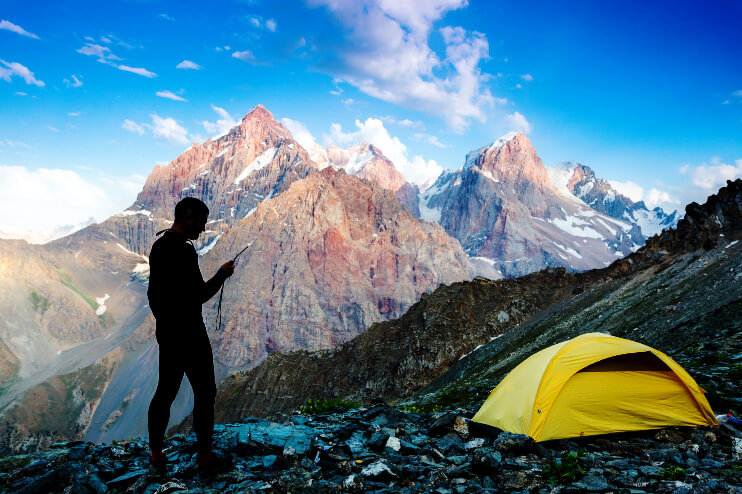 Kaine in the wild

He then told me I was to join the Regimental Skiing Team. So the next day I was at Heathrow Airport on my way to join the rest of the team in Canada. I joined the Biathlon Team, I wasn’t the fastest skier but discovered I was a good shot. I spent the rest of the season on the Biathlon Team, traveled to Canada, Norway, Austria and France. That next summer, I joined the Army Shooting Team, and the following winter joined the Army Alpine Downhill Team.

Stay tuned, in part two Danny dives into his worst travel story and his favorite place to travel.
(Hint – you will never, ever guess)