Conakry, Guinea, September 2009.  One year after the coup, military junta leader Camara had just broken his public promise and announced he was running for president instead of stepping aside for general elections.  Military convoys full of heavily armored, red-beret’d troops with doubtful trigger control muzzled onlookers regularly.  In the case of a full-scale meltdown, we had agreed on an exit plan which included running a mile+ down a beach to where the boat would pick us up to get us out of the country.  Given the situation, I had a packed a “Go-Bag” or Bug-Out Bag” (BOB) as it’s called, so I could make a run for it in the event of another coup.   Fortunately, we left the country about a week before the protest/massacre in the Conakry stadium.

In an emergency or natural disaster, it can be a good idea to know how to pack a BOB in case you need to make a quick exit in the middle of the night.  For an extra advantage if there’s a very real possibility of things going south, I know people that sleep fully dressed, ready to bail.

What’s in the box? 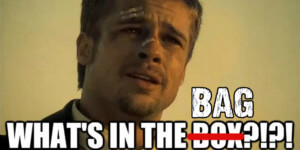 What’s in the BOB?

You can find lists which prepare you for even the worst apocalyptic scenarios or pre-made BOBs for your home, your car, the reckoning or pretty much any situation.  BOB’s can also be listed by the potential duration you’ll be out: three-day; one week, etc.  My list is pretty sparse, since my goal is to make a stealthy, light-weight, exit.  Mostly I’m just prepping to get out of the hotel with cash options and all my documents, but I have a few extras in case I need to hide out for a couple days.

Again, this is situationally dependent.  If you’re staying in a posh hotel in Europe, then you’re probably okay.  If you’re in the Khyber pass, then you’ll need to rethink your pack-out.
Also remember: In third world countries, the amount of stars on the hotel is not just a sign of quality, but security as well. Take that into consideration as you plan and pack.  If you’re concerned about hotel safety, try my article on staying safe in your hotel.

What’s in your BOB?

Purse etiquette: How to keep your purse and its contents

Purse etiquette: How to keep your purse and its contents